A New Tragedy Follows Another

In wake of the pandemic that swept the nation, a new tragedy has struck: a new wave of violence aimed at the Asian community. These attacks take the form of belligerent comments towards Asians, hostile attitudes from the public, sabotage for Asian-run businesses, and most concerningly, violence toward Asian citizens. As numbers for positive COVID-19 cases rose in New York so did the number of attacks on Asians. Many were outraged at the attacks and denounced these crimes, taking to social media and the news to protest the wave of violence. Despite this, it has remained an uphill battle for the law to prosecute these attacks as “hate crimes” because there is no set model for what an Asian hate crime looks like, causing many to argue that there is a lack of crucial “racist motive”. People must start acknowledging attacks on Asians as hate crimes, and not “random attacks”. The continuous violence and disrespect aimed at Asian-Americans is not something that should be brushed off or dismissed. The law needs to be changed so that the standards for hate crimes can be met by these anti-Asian attacks.

Although attacks on the Asian community predate the COVID-19 pandemic, the spread of the virus brought a new wave of violence towards Asians that is more visible than before.  Previously, coverage of anti-Asian attacks has been sparse and isolated, making it difficult to make a case that there even is an anti-Asian sentiment present in New York. As news about COVID-19 and its origin in China spread, however, the previous dull sentiments quickly became inflamed and aimed toward Asian communities. A surge of anti-Asian incidents rose in the past year, as people began blaming anyone of Asian heritage for the spread of the disease. These incidents range anywhere from verbal harassment, shunning, destruction of property and business, to theft, assault, and murder, with Asian women experiencing such incidents at the highest rates. The truth is, the spread of COVID provided many racists with the perfect excuse to act on their preconceived, prejudiced notions and the Asian community, their unfortunate victim.

Racial Fetishization Is Nothing New

Something important to consider is that this attitude toward Asian-Americans is nothing new. A large part of our history in America both vilifies and fetishizes Asians and their own cultures, contributing to the ongoing issue of racism towards Asians. In particular, a huge intersectional issue lies between racism and misogyny as a result of the racial fetishization of Asian women. The way the media portrays Asian culture, especially the stereotype of Asian women as either seductive and provocative or docile and submissive partners, contributes further to this problematic attitude. The racial fetishization of Asian culture and stereotypes is, again, nothing new, but in light of these new attacks, another excuse is provided for racists to hide their motives and prevent their actions from being labeled as ‘hate crimes’ or sexism. This is most obvious in the case of 21-year-old Robert Aaron Long, the suspect responsible for a spree of spa shootings in Atlanta on March 16, 2021.

Of the eight killed by Long, six were Asian women. Despite the number of Asian women targeted in his shooting, Long insists that his motive was “not racially motivated” and was instead a way for him to relieve himself of the “temptation” spas posed for his “sex addiction”. He has been charged with counts of murder as well as aggravated assault, but no charge of a hate crime. So far, the narrative put out by those involved, Long’s family, friends, the police, and the general public, is that the motive was Long’s sex addiction. Long claims that he viewed these spas as “a temptation he wanted to eliminate” and yet, of the eight killed, six were Asian women-the same Asian women who are often sexualized, fetishized, and objectified. Considering the history of how Asian women are portrayed in American media and pop culture, can the deaths of these six Asian women be attributed to sex addiction alone?

Can Racists Always Hide Behind Other Motives?

It doesn’t seem to matter either way what Long’s true motives were since the police are not charging him with any charge of a hate crime. Regardless, all of this has culminated in a new wave of violence towards Asians, as people take the opportunity to attack them, both physically and vocally, in public. There are a few cases in New York, alone—a Filipino woman attacked in broad daylight, an elderly man brutally kicked in the head—that present new concerns for the Asian community. Asian-run businesses have likewise been harassed and forced to shut down as people purposely place orders and fail to pick up, disrespect Asian employees, or damage their reputation.

The Challenge in Pursuing Hate Crimes

It is clear that public sentiment towards Asians is overwhelmingly negative. And yet, there is a shockingly low number of hate crimes reported or pursued by Asian-Americans. As mentioned previously, one standard to meet is proving that there is a “racist motive” behind the crime, and this, by itself, is difficult as most attackers attack without warning or hide behind other motives, as we saw with the case of Long. Another challenge is that there is a lot of distrust within the Asian community toward law enforcement, resulting in a lack of reporting due to fear of retaliation, immigration status, and inability to provide resources. I would say, however, that the biggest issue with pursuing Asian hate crimes is that, unlike crimes toward Black, Latinx, Jewish, Muslim, LGBTA+, etc. communities, which have a model for hate crimes, it is harder for crimes toward Asians to be considered “hate crimes”, as there is no widely recognized symbol of anti-Asian sentiment like a noose, swastika, Confederate flag, etc. Typically, the only evidence in Asian assaults is that the victim is of Asian descent which is not enough to meet the standard of “racist motive”.

Searching For A Solution

There is no clear-cut solution to this problem. Asian-Americans living in New York are faced with a particular blind spot in the eyes of the law, so a lot of the issues coming up now are unprecedented, as there was never enough systematic crime to draw attention, and more importantly, resources to it before. Even though New York has experienced the largest increase in Asian hate crimes, it still falls short in protecting a vulnerable community. There are calls for lowering the bar and providing more policing of various communities, as a result. This comes with concerns, however, that lowering the standards can harm other communities facing heavy policing. There is no easy solution to this issue, but it is clear that something must be done. The law needs to be amended so that these types of attacks can be properly recognized by the courts as “hate crimes” toward Asian communities, and not be attributed to other motives. More resources and attention need to be allocated as well, to protect the Asian community. Something must be done, and it must be done soon.

There is no more story. 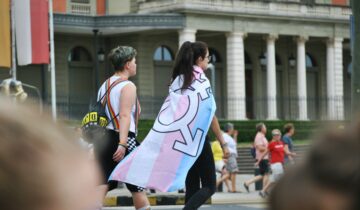