It is common for New Yorkers to absorb news media everywhere they look without noticing it, whether it is from their television prior to heading to work in the morning, a podcast on their smartphone listening to current affairs, or even advertisements from fellow New Yorkers when walking on the street. They don’t hesitate to click on news articles without a second thought in regard to their validity. Since the unfortunate introduction of Coronavirus disease, otherwise known as Covid-19, into our daily lives in February 2020, the news media has been flooding information into every aspect of our lives.  This has left a lasting impact and impression on our society. In connection with the ongoing Covid 19 pandemic some false, misleading, and fraudulent information has been released. Although fake information is nothing new this specific time period has had adverse effects on people of color, especially minorities in the African American community. The fact that these publications have such a lasting impact on this racial group is unfortunate, and measures should be taken to remediate this situation as soon as possible.

With all the information around us at every waking moment, how can anyone be sure what is true or what is false?  Dr. Rohit Kumar Kaliyar, an Assistant Professor in the Department of Computer Science and Information Technology, AKTU, India, states that due to the increasingly alarming amount of users on social media in the present age, news articles can be easily published, shared, and cited without knowing whether or not the information within is credible or authentic. Fake news about Covid-19 spreading among dozens of popular social media outlets can cause unimaginable harm to New York communities, especially the African American community. In some cases, fake news media articles are often published without knowing of the duplicitous contents contained due to human intent to spread false information, negligence, or inaccurate data extraction. With the dissemination of fake news, African Americans often feel uneasy when dealing with information regarding Covid 19.

With the outbreak of Covid 19 at the beginning of 2020, many scholars have rushed to conduct research papers about the global pandemic and how it has impacted many communities, individuals, and businesses. Multiple racial groups have been affected by the rush to disseminate information and earn website revenue as fast as possible. During this period of time, many media sites have characterized the Covid 19 crisis as the “Chinese virus” and have spread false information on how it was the “Asians’ fault” as suggested by Wen et al. These false media publications impact a lot more than the consumers but also the group of people it’s reported on. Wen et al., share reports about ethnically Chinese, or those with Asian phenotype, being attacked all across America with increased rates in New York. Asian American Pacific Islander Civil Rights Organizations had gotten reports of over seventeen hundred (1700) instances of verbal harassment due to those false reports from media outlets.

The Asian community is not the only one being affected by the false media coverage; African Americans have been victimized since the outbreak of Covid-19 as well.  In a film produced in 2021, Robert F. Kennedy Jr., the founder of Children’s Health Defense, promotes disproven claims based on fake knowledge promoted by their beliefs about the dangers of vaccines, and how African Americans are at increased risk of Autism because of vaccination. Upon closer inspection, the movie displays a chart claiming to use the same data provided by the Centers for Disease Control (CDC). All the while, said chart was retracted due to “concerns about the undeclared competing interests on the part of the author”. With instances like this, African Americans are distrustful of the healthcare system and often refuse to seek medical attention because of these and such false reports. With false information circulating everywhere, many individuals act on it as they believe it is valid. Situations include the forceful expulsion from homes, refusal of hotel services, and false claims of Covid 19 infection and unlawful quarantine. Xenophobic incidents have become so integrated into today’s society due to media representation of certain groups of people, that a more tolerant society needs to be created rather than unlawful victimization of innocent groups of people.

With this fraudulent misinformation, African Americans have distrusted the health care system substantially. This has led to a lack of receiving vaccines which plays a significant role in decreasing vaccination rates overall. Over 75 percent of US adults have received at least one Covid-19 vaccination. The following demographics are among those who have received their first booster dose as of July 6, 2022; 61% were White, 15% were Hispanic, 8% were Black, 8% were Asian, NHPI and AIAN made up less than 1% of recipients (.7% and .3% respectively). With Black people being among the lowest group of vaccines received actions should be taken to increase this number. A number of measures are currently being undertaken to increase vaccine availability among this group, and vaccination rates are gradually increasing among all populations. Is it enough or even effective? These efforts have not substantially increased vaccination rates among Black populations. It has been found that on social media platforms like Facebook, official information about Covid-19 vaccines was reached much less commonly by Black people than by other demographics, resulting in widespread mistrust and a lack of reliable information about the vaccines. Where “inequality-driven” mistrust is high, online misinformation can flourish.

With all the problems previously highlighted, how can we make an effort to stop this? It starts with you. When intaking information, be sure to validate if the writing is true before drawing conclusions. Information that should be relied on must be sourced from reputable outlets.  Such sources provide an analysis of a topic that consists of a thorough, well-reasoned theory, and argument, supported by strong evidence, according to the University of Georgia Libraries. Also when source checking it’s important to make sure the source is up-to-date and the author of the source is credible.

Source checking allows people to see whether or not information about various topics is true or not. It does this as it checks to see if the source is up to date and if the author of the source is credible. Especially speaking about covid 19, looking up the origins of information helps the reader and our community combat social inequities. The best way to push for source checking is to share with friends and family about checking whether or not something is true when they hear or read information, even if you’re not affected by it. Not only could it help the lives of African Americans in New York, but it could also help them worldwide.

A Medgar Evers student looking to broaden my writing skills. 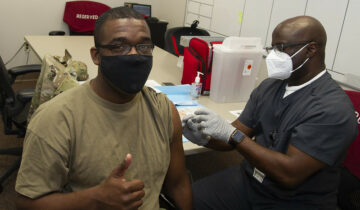